Bringing Out New Discussions From Dark Histories, Creating a Positive Field out of a Negative Environment

"Vegetable Weapon," the series Tsuyoshi Ozawa began at the beginning of the 21st century, has a tone that differs greatly from his works of the 1990s which suggested hope for peace after the end of the Cold War.

Because the artist visited the United States in 2001 soon after the September 11 terrorist attacks, this work carries with it a more direct message about the senselessness of warfare and a wish for peace. It reflects the aftershock of the terror, while the artist's signature motifs of travel, encounters, and collaboration remain unchanged.

Each photograph of the series portrays a woman Ozawa met during his travels across Asia, the United States, Europe, and Africa among many other places, carrying a "gun" made of the vegetable and other ingredients of a chosen dish of her home country. After the photography session, the "gun" was disassembled and cooked to make the dish and shared with everybody who participated in the project. This entire process represented an attempt of disarmament through art, from warfare to conversation and from guns to food.

The Great East Japan Earthquake in 2011 also had a major impact on Ozawa's artistic activities.

A Fictional Community Project and Further Conversation, Communication, and Collaboration

The "Vegetable Weapon" project originated when Ozawa asked a curator from a museum in Fukushima who had previously invited him to participate in an exhibition, if there was something he could do after the great earthquake. Various conversations and exchanges with people in Fukushima that took place over one year developed into this series of work. The experience gave him the energy to endure a period when he could not work at all in the wake of the earthquake.

Since the 2000s, Ozawa's group activities underwent another change of direction.

Starting in 2004, Ozawa formed a unit called "Xijing Men" with the Korean artist Gimhongsok and Chinese artist Chen Shaoxiong. Given the delicate relationships between the three countries in East Asia, their collaboration was quite challenging, boldly exploring the complexity formed by a utopian ideal combined with the reality. Characteristic of his activities during the 1990s, Ozawa incorporated elements of satire with a cynical sense of humor and nonsense as well.

During this period, as globalization had been advancing since the mid 1990s, an increasing number of large-scale international exhibitions such as biennales and triennials were held around the world, and Western curators grew further interested in Asian art.

As it became possible for artists to have more opportunities to interact with one another through international exhibitions, this fostered more multi-layered projects, not from the perspectives of spectators, but rather involving deeper dialogs, exchanges and collaborations with a growing awareness of the conditions of the times and historical and cultural views that differed with each place.

Searching for a New Artistic Approach in Facing Complex Issues

Ozawa's ideas on travel, history, towards other people, his direct involvement with society and its relationship with Asian countries, a form of collaboration that transcended national borders as well as intercultural gaps, and the use of multi-media including video, painting and music, were all combined into a composite art form as a series that was first shown in 2005 entitled the "Return of ...".

Themed on prominent figures active in modern and contemporary society on a global level, "The Return of..." series is comprised of narratives on these individuals that are a mix of fact and fiction using diverse media. The first work in the series, The Return of Dr. N, which focuses on the Japanese bacteriologist Hideyo Noguchi from Fukushima, was created to commemorate the relationship between Fukushima and Ghana for an exhibition associated with 1993 Tokyo International Conference of African Development.

The series continued into The Return of Painter F, which boldly linked Leonard Foujita to Indonesia, and was created in 2015, the 70th year since the end of WWII, followed by The Return of J. L., which depicted John Lennon in relation to the Philippines and Saitama and was first exhibited in the 2016 Saitama Triennale; The Return of K. T. O, which traced Yokohama-born Kakuzo Tenshin Okakura's travels to India and was first exhibited at the 2017 Yokohama Triennale; and The Return of S. T. based on the connection between the Hirosaki-born playwright Shuji Terayama and Iran, first shown in 2020.

In 2020, when preparing for his solo exhibition at the Hirosaki Museum of Contemporary Art showing all five works of "The Return of..." series, Ozawa commented:

"The 'Return of...' series is an act of forming solid links between remote people, intensively observing the intersection of cultures that are personal to me and those of others together, and creating a work of art with the mutual relationships that are formed, without referring to institutionalized art history or Western academic disciplines."

While paying respect to predecessors who strived to create a way in unseen fields, the series casts light on the unknown, as well as the personal aspects of each subject bearing agonies and imperfections. Moreover, by adopting the perspective of a fictional third person, the series presents alternative ways of seeing history and proposes new approaches to complex social issues that are often referred to as negative histories, such as wars, nuclear power, and the failure of development, among others.

From Jizos to Goats

As the Covid-19 pandemic hit, Ozawa began to keep two goats in the Toride Campus of the Tokyo University of Fine Arts, Ibaraki, where he teaches as a professor, aiming to observe our society from the viewpoints of the animals.

This project called "Eye of a Goat" involves diverse people of varying ages, such as students, instructors, and members of local communities. They have taken turns to take care of the animals and built a house and fences with timber and bamboo cut from the neglected forest located within the campus.

Goats have been closely related to human beings from ancient times, with their milk and dung also being useful for various cycles in nature. In taking care of the goats, students have not only explored diverse possibilities of expression, but have made efforts to continue to be creative within their fields of research, production and artistic activities despite the conditions and effects of pandemic. In addition, they have explored how communities should exist going into the future as an attempt of searching for the connections between people's ways of living and art.

The idea for the project was derived from occurrences in the wake of the Great East Japan Earthquake, such as the emergence of various places that were said to be radioactive hotspots, and how Ozawa was shocked at the dilapidated state of the university with weeds covering the ground of the campus when he first arrived to teach because numbers of students had left Toride due to several courses being moved to the Ueno campus for various reasons.

Because the suburban towns that were developed for commuters to the urban center of Tokyo during the rapid growth period seemed similar to his own hometown, he began to wonder if there was anything he could do to overturn the negative environment reminiscent of his origins and where he was currently living, and to reactivate dilapidated suburban areas and satoyama environments.

From the Jizo that quietly watch over the lives of people to the eyes of goats...
Taking a different approach from ideas about art that were imported to Japan from the West since the Meiji era defining it as being human-oriented and strongly based on "the self," Ozawa incorporates the diverse viewpoints of others by bringing imagination into play within the process of creation. In his works, he continuously inquires how art can relate to how we live in our contemporary society in order to provoke new discussions from negative histories and create a positive field from a negative environment. 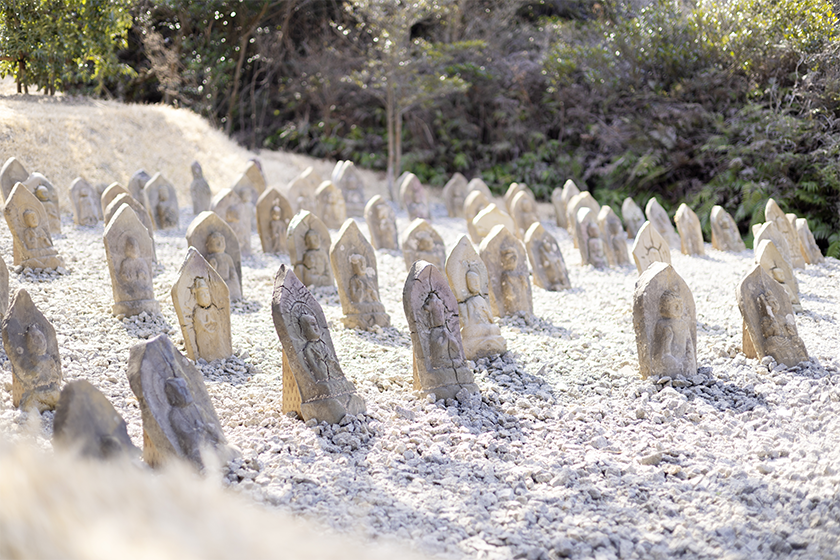 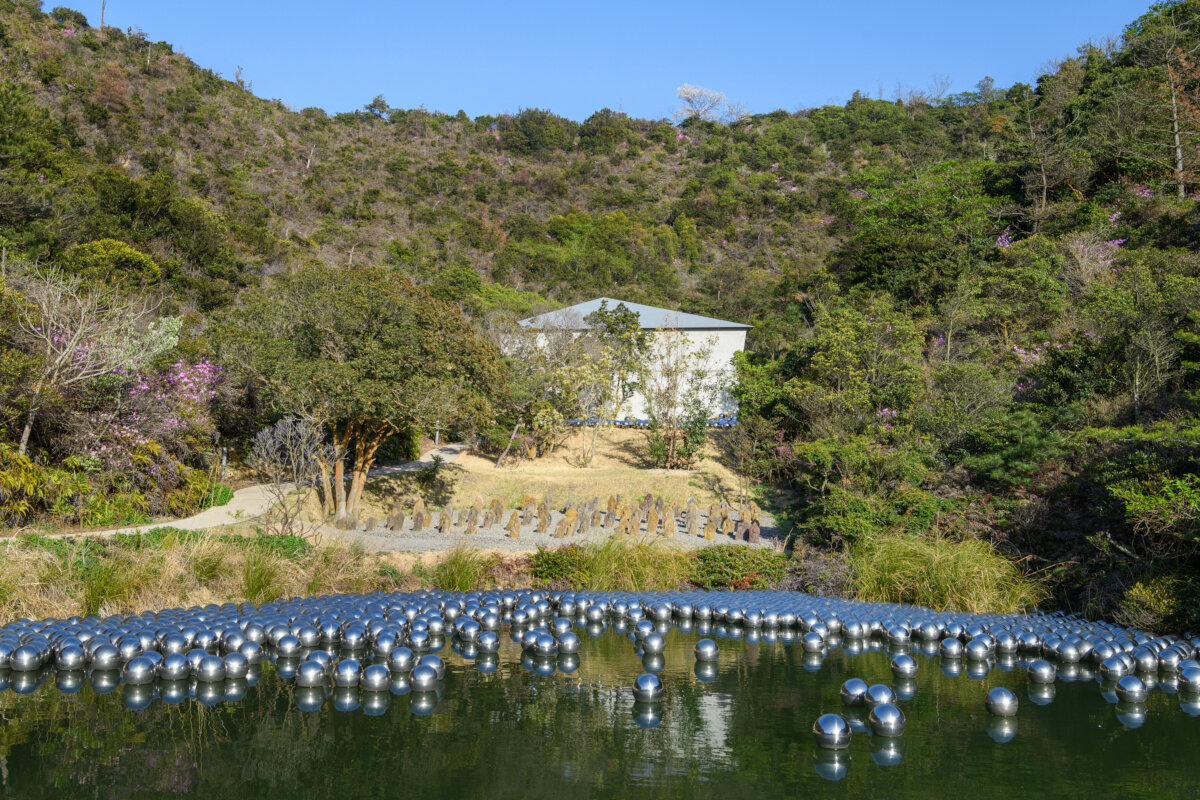 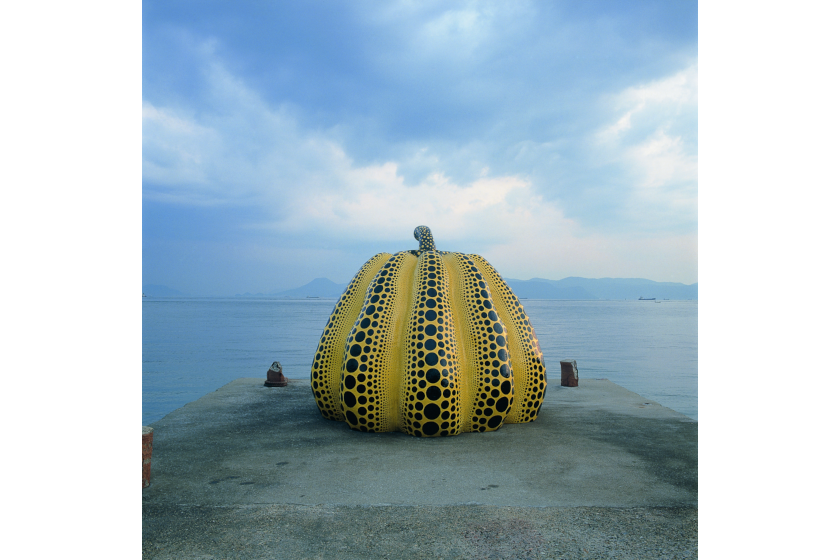