The Art House Project is an art project underway in Naoshima's Honmura district. It began in 1998 with Kadoya, and currently comprises seven locations: Kadoya, Minamidera, Kinza, Go'o Shrine, Ishibashi, Gokaisho, and Haisha. In this project, artists take empty houses scattered about residential areas and turn the spaces themselves into works of art, weaving in history and memories of the period when the buildings were lived in and used. Going from one of the houses to another, visitors pass through the Honmura district, where everyday life unfolds around them, in the process not only engaging with works of art but also sensing the layers of time and history interwoven in the community and the fabric of local people's lives. A notable feature of the Art House Project is that because viewing it means traversing a zone of daily life, it acts as a catalyst for interaction between visitors and local residents, giving rise to many a memorable episode. A truly organic project that changes day-to-day, it has evolved to present a new model of community, characterized by positive interaction between urban and rural, young and old, residents, and visitors.

* The opening hours for the Art House Project is partially changed and accessible without reservations.
(see details here)

Closed
Mondays
* Open on Mondays for national holidays but closed the next day.
Open Days Calendar 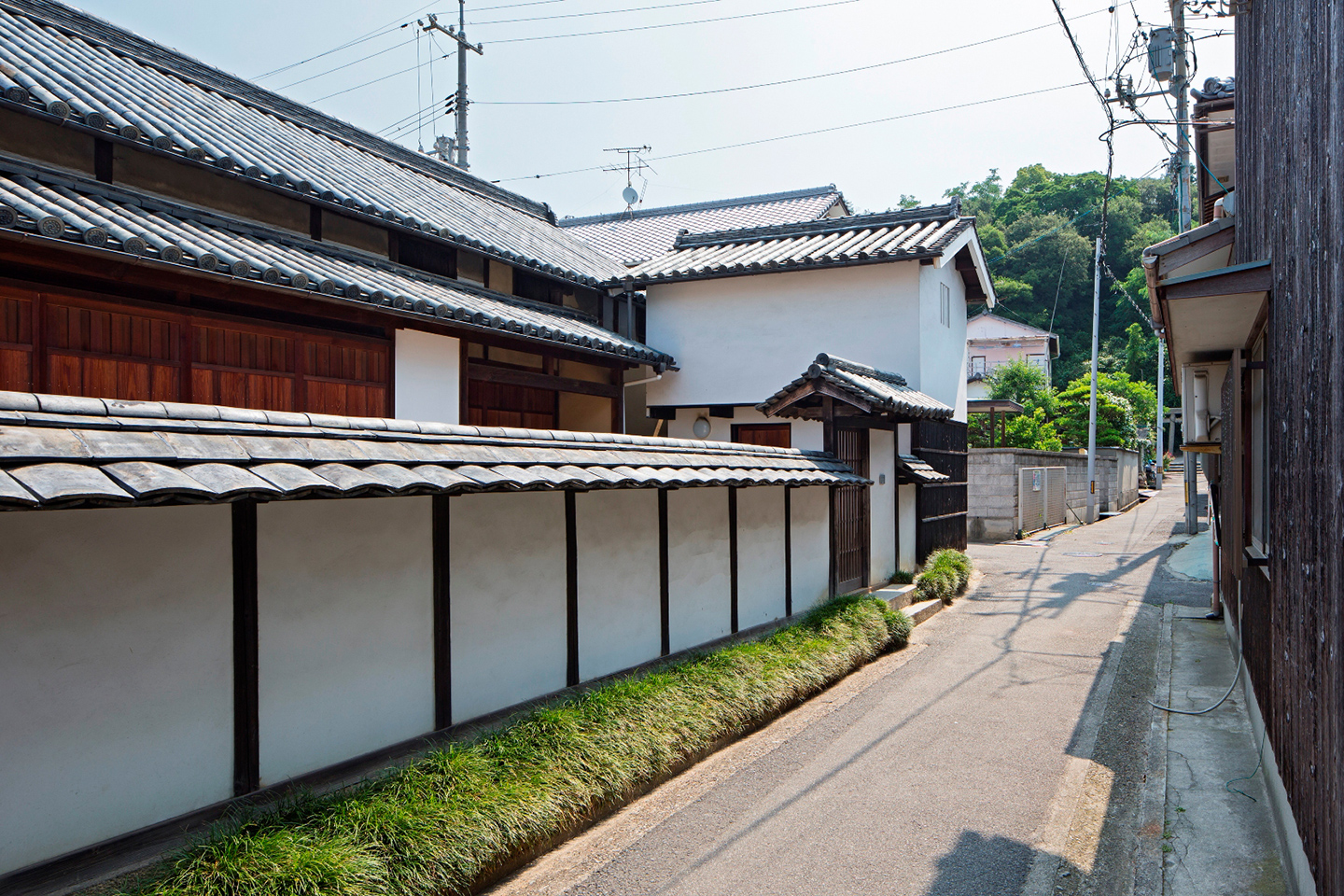 Honmura Lounge & Archive was once used as an agricultural cooperative supermarket. Most of the basic architecture was preserved, and space was designed by the architect Ryue Nishizawa. In addition to selling tickets for the Art House Project and related books and goods, it also serves as an information center.

Closed：
Mondays
* Open on Mondays for national holidays but closed the next day.

Kadoya was the first building in the Art House Project to be completed. The house was constructed roughly 200 years ago, and it was restored to its original appearance with a stucco finish, smoked cedar boards, and traditional roof tiles. The townspeople of Naoshima participated in the creation of the work Sea of Time '98 by Tatsuo Miyajima. This work also served as an opportunity to interject modern art into the lives of the islanders and the local area.

Minamidera is a new building, and it was designed by Tadao Ando to accommodate the size of the works of James Turrell. The vicinity was once home to five temples and shrines, as well as the ruins of a castle, making it the center of history and culture in Naoshima. The name Minamidera (literally "southern temple") seeks to preserve the idea that the temples which once stood here were emotional support for the people.

James Turrell Backside of the Moon,
1999

James Turrell
Born in 1943 in Los Angeles, California. MFA, Claremont Graduate School. Major Turrell exhibitions have been held in 1980 at the Whitney Museum of American Art, New York and in 1995 at Art Tower Mito, Ibaraki. Significant works include the Roden Crater project (1979 to present, Arizona), House of Light (2000, Niigata), and three works introduced in 2004 at Chichu Art Museum: Afrum, Pale Blue together with Open Sky and Open Field.

In order to ensure a comfortable viewing experience for everyone, there may be times when we restrict the number of visitors entering the gallery at Minamidera.

About the waiting numbers for Minamidera

Kinza's building was once a small house built more than a century ago. Major structural elements, such as the roof and pillars, utilize the original traditional techniques, but the structure itself, including the exterior walls, has been turned into a work of art. Rei Naito created a new space by subtly adding to the preexisting connections with time and nature. This work can only be seen by appointment, and only one person may enter at a time to view it.

Admission：
JPY 520
* This fee is separate from the fees incurred for other art houses.

Note：
Can only be seen by appointment, and only one person within 15 minutes may enter at a time to view it.

※Art House Project "Kinza" will be closed temporarily for maintenance. Due to this, we are not accepting new reservations for "Kinza" currently.

Hiroshi Sugimoto designed this building to coincide with the restoration of Go'o Shrine, which dates to the Edo Period. A flight of glass stairs links an underground stone chamber with the main hall, connecting the subterranean and the surface to form a single world. The main hall and worship hall are based on the style of early shrine architecture, such as that of Ise Shrine, as well as the artist's own aesthetic sensibility.

Hiroshi Sugimoto
Born in Tokyo, 1948. Major exhibitions include Sugimoto (Metropolitan Museum of Art, New York), Hiroshi Sugimoto (Mori Art Museum, Tokyo), and traveling exhibits at other sites from 1995 to 1998, as well as History of History (21st Century Museum of Contemporary Art, Kanazawa), which was also presented at the National Museum of Art, Osaka in 2008 and 2009. At Benesse Art Site Naoshima, Mr. Sugimoto has contributed to Out of Bounds: Contemporary Art in Seascape (1994, Tokyo), Standard (2001), and Naoshima Standard 2 (2006-2007).

Formerly the home of the Ishibashi family, who prospered producing salt in the Meiji Period, it was used as a private home until April 2001. The salt-making industry supported the livelihood of people in Naoshima for many years, and restoring the home was considered important to understanding the history and culture of Naoshima. Hiroshi Senjyu spent five years from the original conception of the idea developing the entire space of this "tangible memory" into a work of art.

Hiroshi Senju
Born in Tokyo, 1958. PhD, Tokyo National University of Fine Art and Music. Honorable mention in the painting category, 46th Venice Biennale (1995). Significant works include the Flat Water and Waterfalls series. Public art by Mr. Senju includes a series of panels for the Daitokuji-Jukoin-Betsuin temple (2002, Shizuoka) and murals for Terminal 2 at the Tokyo International Airport, Haneda (2004, Tokyo). A contributor to Naoshima Standard 2, (2006-2007).

The name Gokaisho (literally "place to play go") is derived from the long-ago custom of the islanders gathering here to play the game of go. Yoshihiro Suda converted the structure into an art space, and his work Tree of Spring, inspired by the work Falling Camellia by Hayami Gyoshu, is displayed within. An actual five-colored camellia is planted in the garden, creating a contrastive effect with Suda's camellia inside.

Haisha, meaning "dentist", was once the home and office of a dentist, and Shinro Ohtake converted the entire building into a work of art. The house incorporates an eclectic array of stylistic elements, appearing in some places like a sculpture, in others like a painting, and in still others like a collage or scrapbook. The title of the work, Dreaming Tongue, represents the process of holding something in one's mouth and recalling a dream by retracing the taste and scent.

In order to ensure a smooth admission, groups of 9 or more visitors who intend to visit the "Art House Project" are advised to contact us in advance using the Benesse Art Site Naoshima Group Advance Notice Form.

Contact us:
In order to ensure a smooth admission, groups of 9 or more visitors who intend to visit Art House Project are advised to contact us in advance using the "Benesse Art Site Naoshima Group Advance Notice Form."
* Due to limited gallery space, please divide your group into smaller groups of around 8 people at a time.

The "Art House Project" is viewed by walking between galleries in various locations. Visitors should first purchase an entrance ticket at Honmura Lounge & Archive.

For visitors with babies or small children

(1)Accessibility
Since we have renovated old buildings, some places are not accessible to visitors with disabilities and special needs.
We ask for your understanding.
We will support you as much as possible when you visit us, so please contact and discuss directly with our facilities.

(2)About lending wheelchairs, etc.
・Wheelchairs: We have a wheelchair available at Honmura Lounge & Archive.
・Writing tools: Available.
・Multi-purpose toilets: There are 3 locations in the Honmura district around the Art House Project.
・You may enter our facilities with a service dog, a seeing-eye dog, and/or a hearing assistance dog.

When visiting the museum