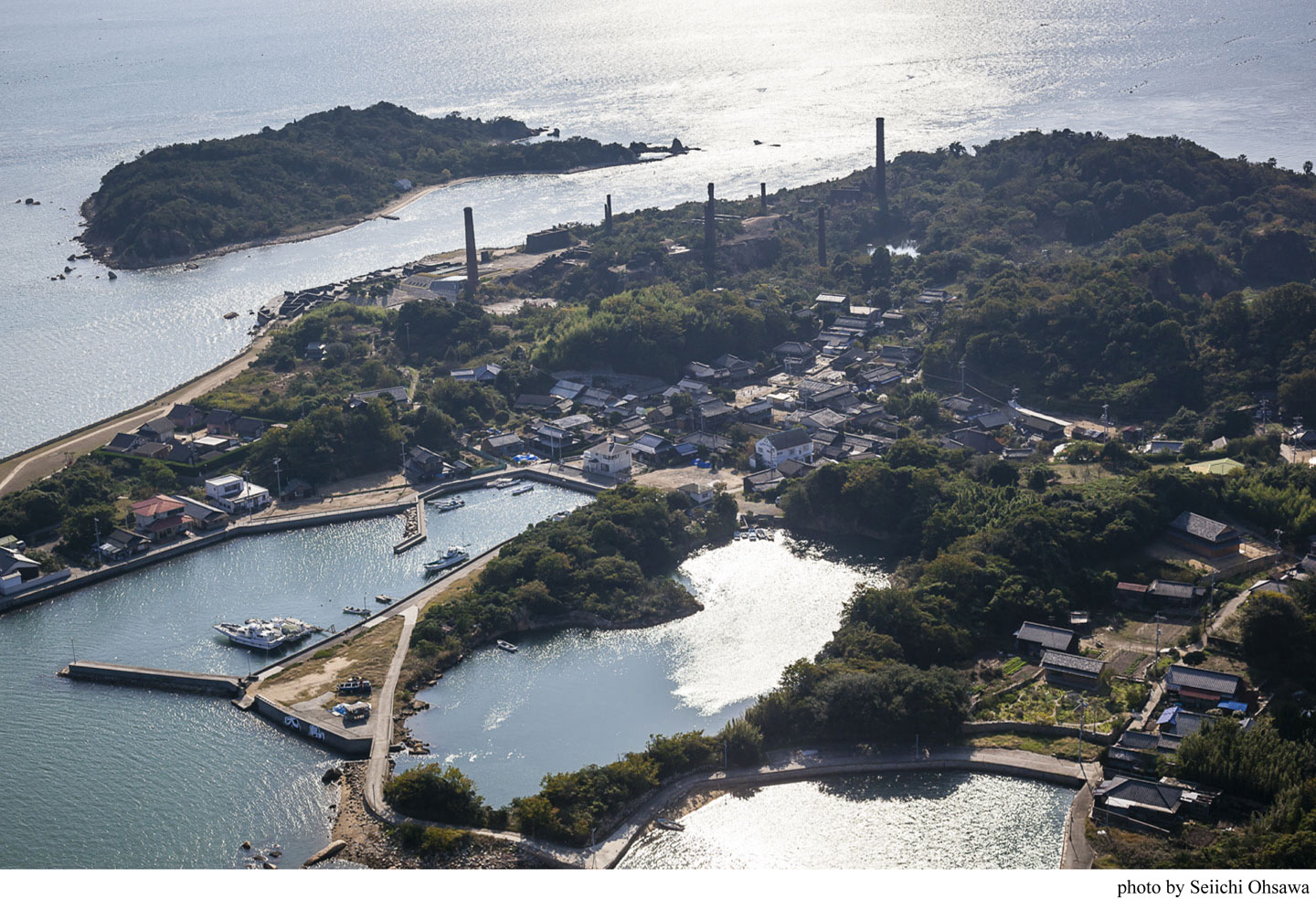 Inujima, in Higashi-ward, Okayama, is a small island that can be covered on foot in about two hours. The island's prosperity came from its stone quarry during the Edo period, and its copper refinery in years after thaoperationt at the beginning of the 20th cenurz. However, with changes in industry and society, the island's population has dwindled to about 50 people.

In 2008, Benesse Art Site Naoshima built the Inujima Seirensho Art Museum on the island, and opened the Inujima "Art House Project" in 2010 based on the motto: "Using what exists to create what is to be." Both have brought an influx of visitors and new life to the tiny island. In addition, since 2002, the island has attracted various performing arts groups, such as "Ishinha," who have come to perform on its outdoor stage. Benesse Art Site Naoshima, which originally focused on contemporary art, set out to foster a deeper relationship with the local island community, and recognised the potential and power of the performing arts in achieving this goal. The performing arts movement has been embraced on the island, where it serves to both promote its culture and pass it on to future generations.

There are various sites on the island which are reminders of its flourishing past: the ponds at the old stone quarry sites, the smokestacks of the old refinery, and the abandoned houses of inhabitants long gone. In the shadows of these remnants live the residents who have always loved the island; those recipients of its heritage, culture, and natural beauty. This summer, we are proud to host four performing arts programs, including drama, dance, and music. Each taps into the true essence of the island's character and the characters of the local people. Each hoping to move, excite and inspire the audience to deeper thought. This summer, you can be sure: something new will begin on Inujima. 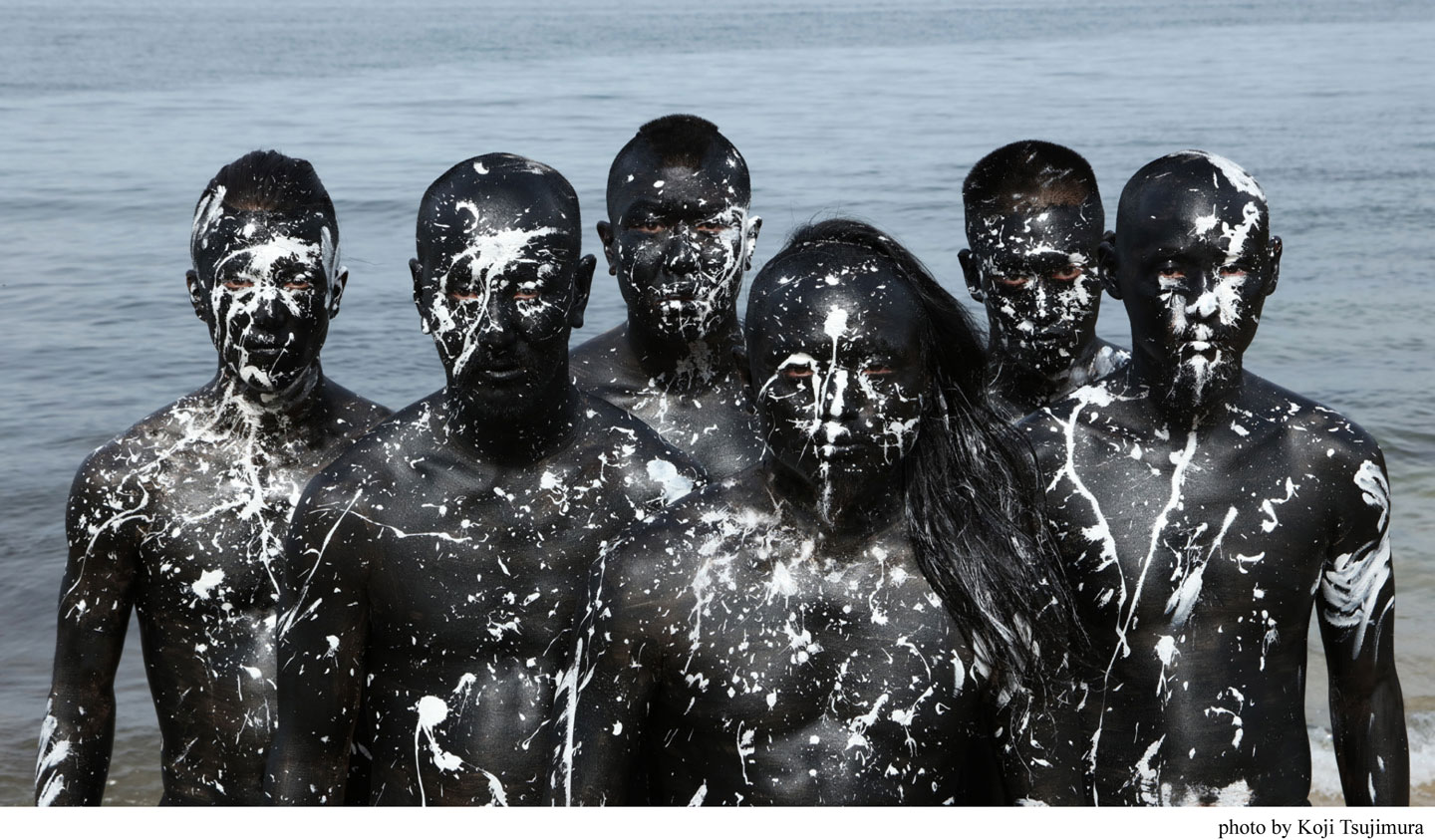 New Outdoor Events by the Hyper-Performance Group "MuDA".
MuDA aims to portray and convey some of life's regenerative experiences, such as "starting something new after a collision," and "continuing to stand up after falling down," and presents these in their ritual performances.
Their theme this time is the ubiquitous universal material: iron. The stage is to be set in a restricted area of the former Inujima Refinery. MuDA will create a ritual space at the site, where the remains of semi-refined copper, iron, and pieces of glass have scattered and solidified on the black ground. Their performance focuses on the unique motions of collision and reaction: the dancers collide with each other, objects, and the earth. A variety of components at the site, both natural and artificial, such as iron itself, the natural environment, sound, projections, pressure and more, will be incorporated into the performance, enabling stress to be seen and felt.

"Iron is the most stable element in space. The energy released from an explosion moves toward a stable state, and then repeats the cycle. Iron continues to be produced from the repeated collisions in the cosmic cycle of the universe. This means that even in the vastness of space, where all elements seem to exist in disorder, they are actually moving in the same direction. From these collisions and the reactions born from them, everything starts. In every moment of every collision, life and the world begin." (MuDA)

Nibroll
"The World has Shrunk, and Only a Certain Fact Remains" 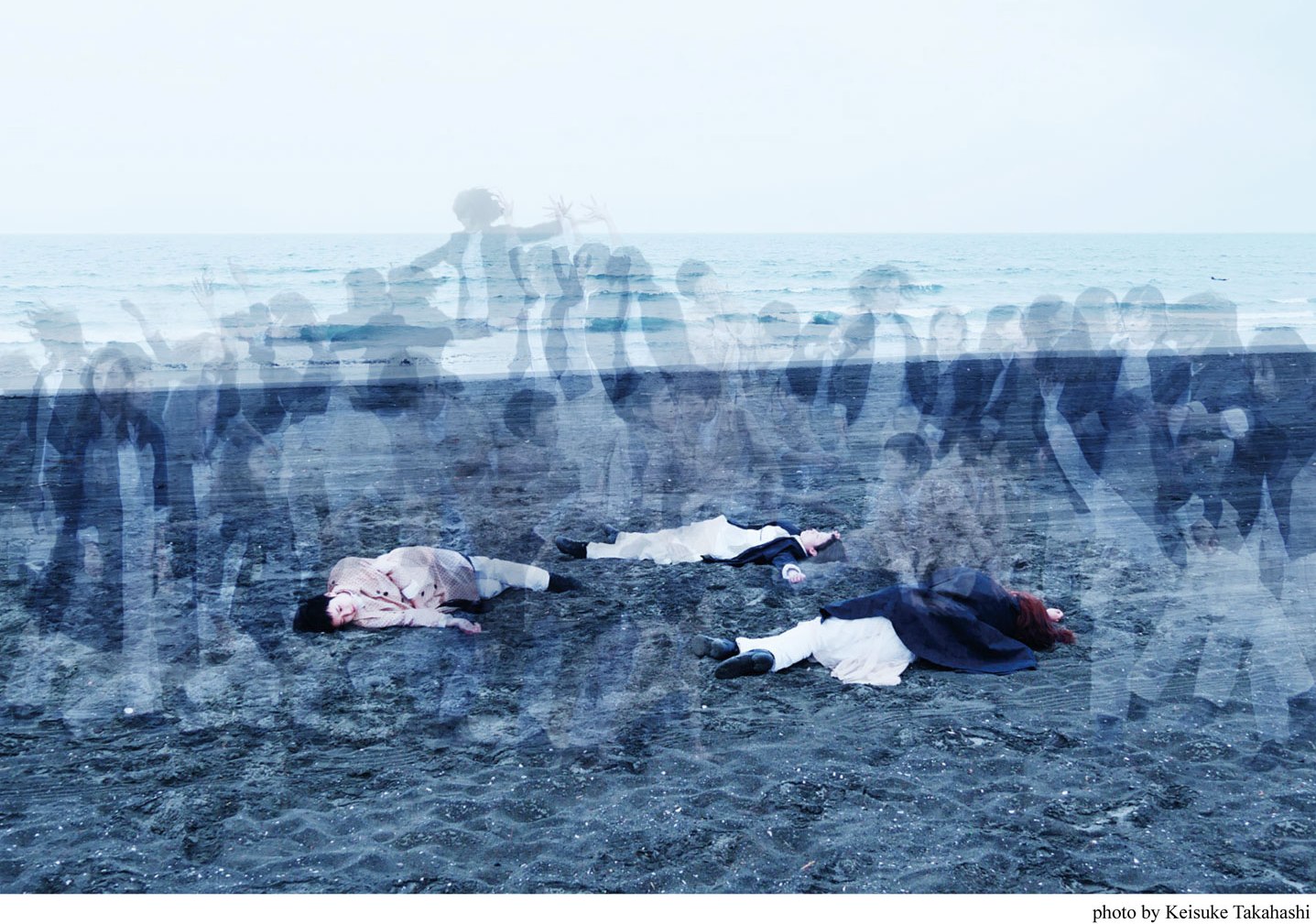 The performing arts company "Nibroll", launched by choreographer, Mikui Yanaihara, performs with other artists nationally and internationally, in their exploration of physical expression. This time, they set out to give form to Inujima's past and future through dance. They have chosen as their stage the power plant of the now-defunct Inujima Refinery, a symbol of Inujima's past prosperity.

"On this island, there are some locales which are lost in time, places with stories we may never know. From the time the Seto Inland Sea was formed, people have been living on Inujima. The island has experienced repeated cycles of prosperity and decline, and what you see is its present embodiment. In the remnants of the past, lies the possibility of new beginnings. The stories of this small island could never be found in a city. The stage we've chosen this time is the site of a former power plant which once fueled the refinery. It provided a means of support for the people on the island, as well as being the energy source for this particular sector of Japanese industry in a bygone era. In a place that the years have forgotten, we hope to express the sparks that spring from within, drawing new lines with our bodies. Join us, as something beyond our imagining emerges from the objects there, the lines we draw, the time we share, and the bodies we inhabit."（Nibroll） 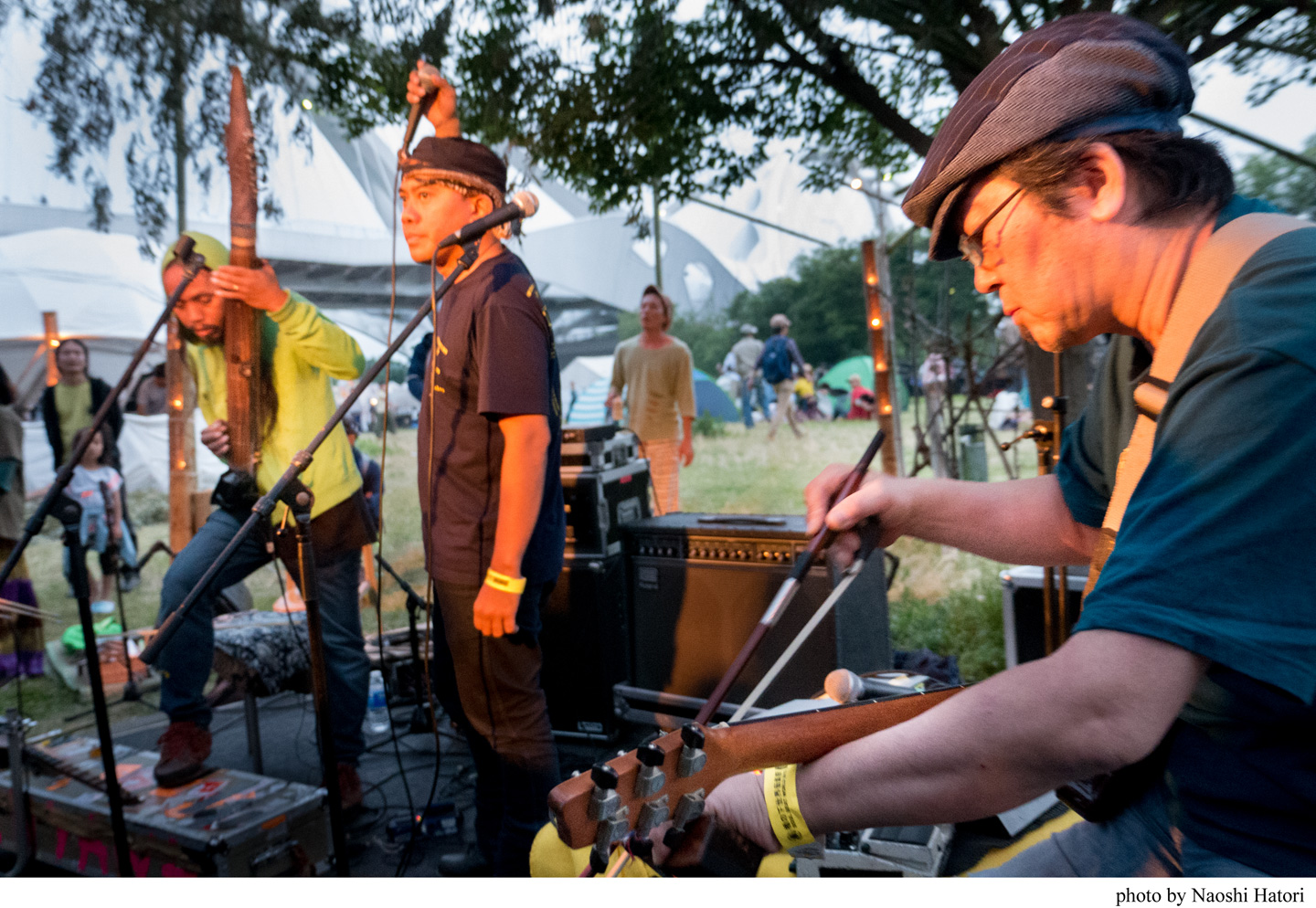 A special concert venue, "Inuto Imago", produced by guitarist Kazuhisa Uchihashi, will be open for a limited time on Inujima. Uchihashi and a small group of musicians from Indonesia, will tune in to the sounds of Inujima island, and create their own unique music. There will be performances with special guests, musical workshops, and a project to revive the island's most well-known folksong.

Venue："Inuto Imago" (near Inujima port) and others

■Inuto Imago Live Performances:
Kazuhisa Uchihashi, and three musicians from Indonesia, Rully Shabara, Wukir Suryadi and Iman Jimbot, will perform every night, along with a variety of special guests.

■Inuto Imago Workshops:
Musical workshops will be held on Inujima throughout the 10 days. Led by three unique musicians, the workshops will culminate in a joint concert the last weekend of the festival. Talents include Kazuhisa Uchihashi who plays a rare wooden instrument called daxophone; Indonesian musician, Rully Shabara, who listens to the voices of his islands and expresses them with his unique vocalizations; and his counterpart, another musician from Indonesia, Wukir Suryadi, who creates original musical instruments from materials available on the islands of Indonesia.

■Inuto Imago Song Project:
"Inujima Ondo" is an old folksong of Inujima island that has changed through the generations. This project aims to restore the original version of the folksong and recompose it with the island residents. They will also create a new island song. Both the traditional folksong and the new one will be performed on the last weekend. 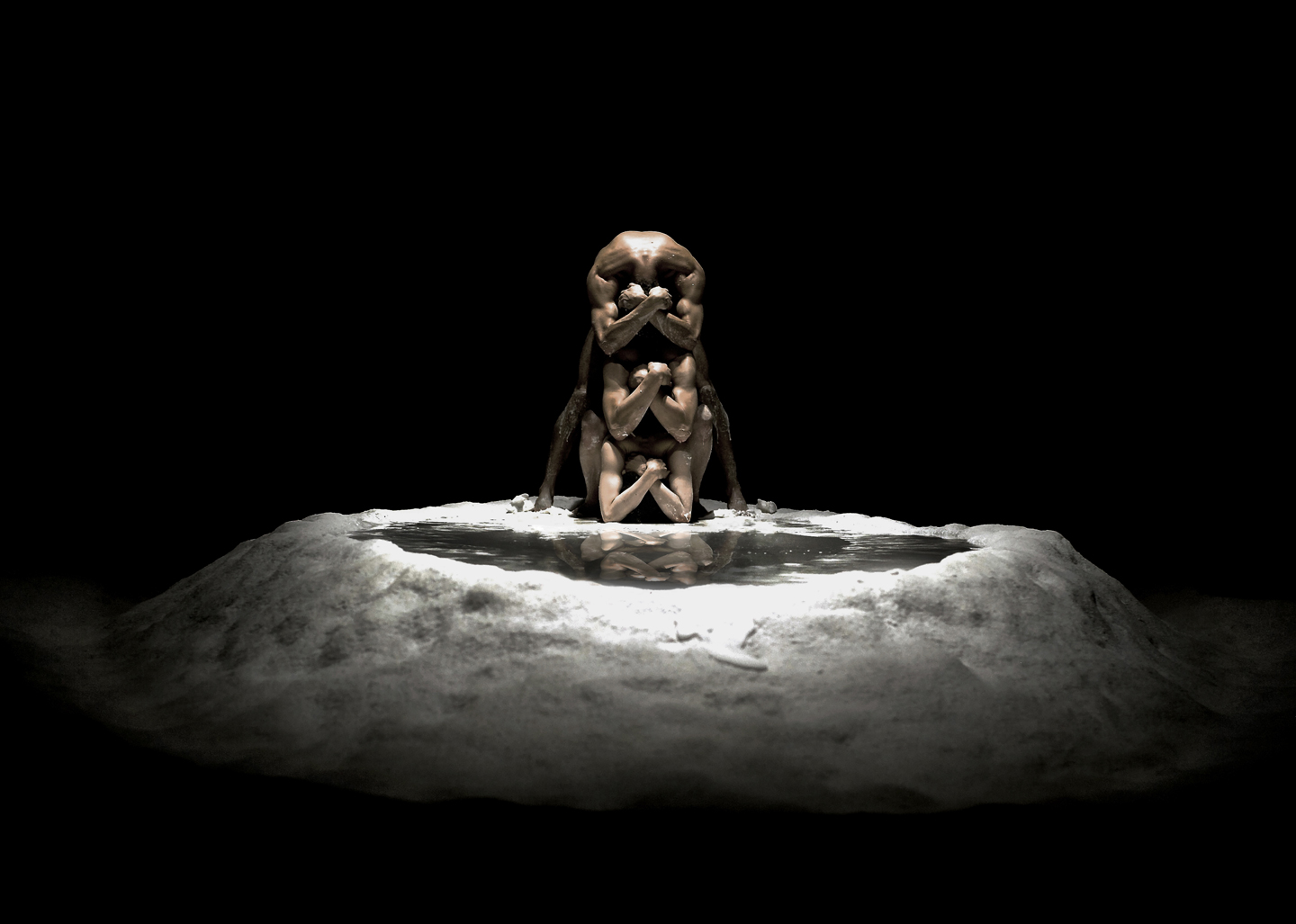 A new contemporary dance piece called "Vessel" has been created by artist Kohei Nawa and choreographer Damien Jalet. It is a performative art installation comprised of bodies, sculptures, and music, and showcases Jalet's characteristic "headless" poses.

Artists who have performed in Inujima in the past, as well as those participating in the Setouchi Triennale 2016, and experts in various art fields, will gather to discuss their projects. We hope to engage the local community and stimulate interest in hosting future performing arts programs on the island.