Fukutake House was launched in 2013 as a project to connect the Fukuda community in Shodoshima with many areas of Asia. The project is based on around the Fukutake House, renovated from former Shodoshima Fukuda Elementary School, includes Asia Gallery the art exhibition space, as well as the Fukuda Asian Diner, where serves a variety of Asian dishes prepared by the local Fukuda community. The Asia Art Platform provides a stage for the Fukuda community and our partners across Asia to deepen our mutual understanding through various activities. This year, we are developing the "Fukutake House Fūdo Laboratory" by gathering and preserving local cultures to revitalize the community. We practice the work that art had from ancient times which connects people to the local, people to people in the frame of community that has been refined by regionality and time, and think of what is being lost by the modernization such as overemphasis in the city in touch through Asian sea as a media. 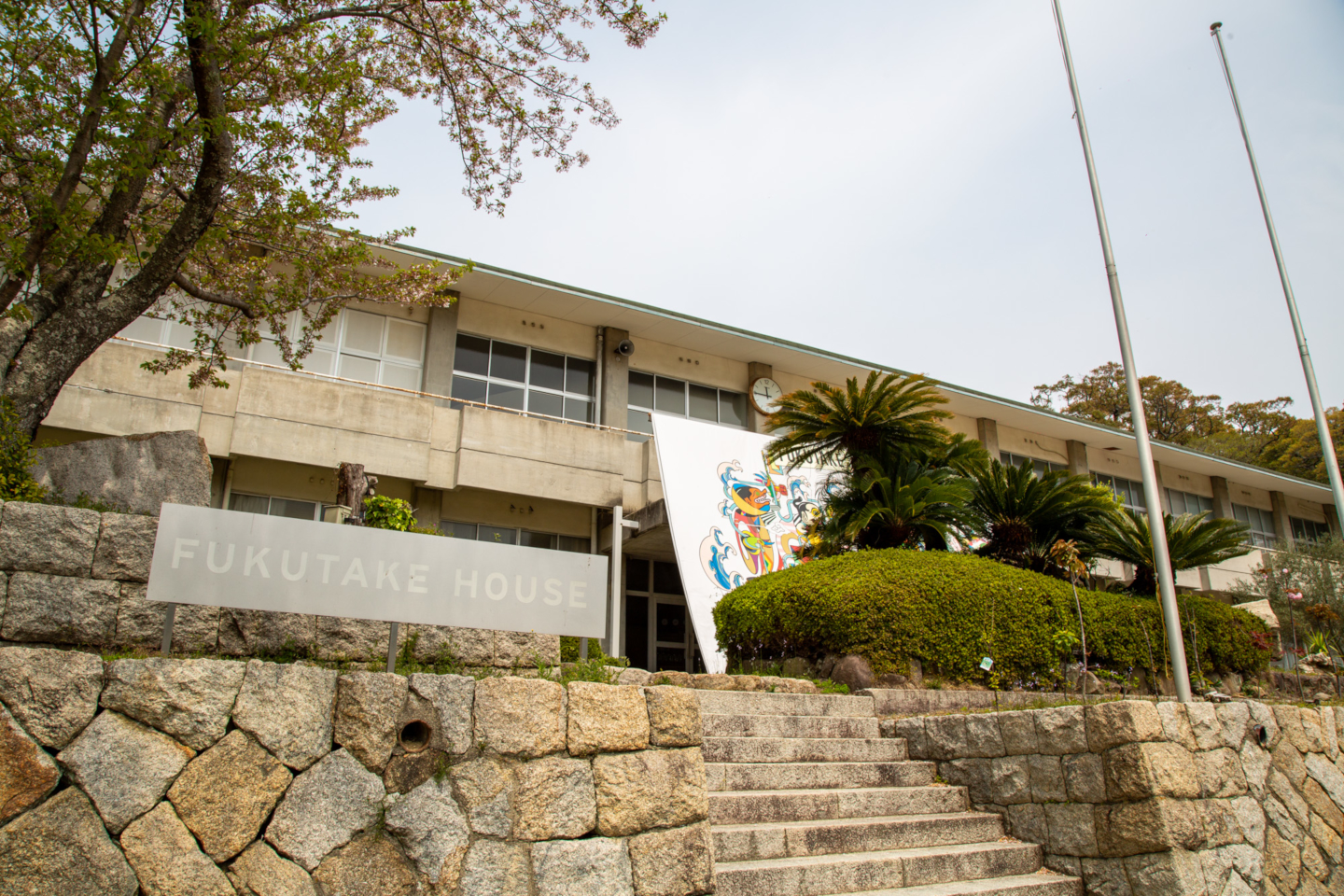 Following the Visible Soul exhibition in 2019, the Fukutake House Asia Gallery will be replacing some of the works on display under the new title of The Sceneries and Portraits of the Eras.
Benesse Art Site Naoshima has had great interest in Asian art since its early days, including inviding the China-born artist Cai Guo-Qiang, who was the winner of the 1st Benesse Prize in 1995, to complete his work Cultural Melting Bath: Project for Naoshima(1998). In particular, we have shifted the stage for the Benesse Prize from the Venice Biennale where it was held for 20 years until 2016 to the Singapore Biennale, and engaged in extensive interactions with Asian artists and the collection of their works which directly address issues that also confront Japan including rural depopulation as well as rapid modernization and urbanization. We have been committed to raising a shared awareness of these issues from a broader perspective through these initiatives.
This exhibition features photographs by Amanda Heng, the winner of the 12th Benesse Prize, as well as a selection of the key works of Japanese artists who have rarely been showcased hitherto from the collection of Benesse Art Site Naoshima. These works invites viewers to consider the currents of the different eras and their transformations, including those that reflect the unique milieu of particular social eras such as "the 1970s", "the bubble economy", "the scrap & build urbanization culture", etc., as well as more personal experiences of these times, works that allude to intergenerational differences, and those that attempt to express a traditional and universal spirit through the latest technologies and materials. In addition, the exhibition focuses on probing the relationship between the individual and the society as well as their aesthetic possibilities through foregrounding the singular existence of the individual amidst larger currents of the times via unique representations of the artist's own body.
We hope that by looking at the featured works through the lenses of the keywords The Sceneries and Portraits of the Eras, visitors can have an opportunity to reconsider the modern society we live in, the natural environment, human lives, as well as the guiding philosophy of Benesse Art Site Naoshima of "Well-Being". 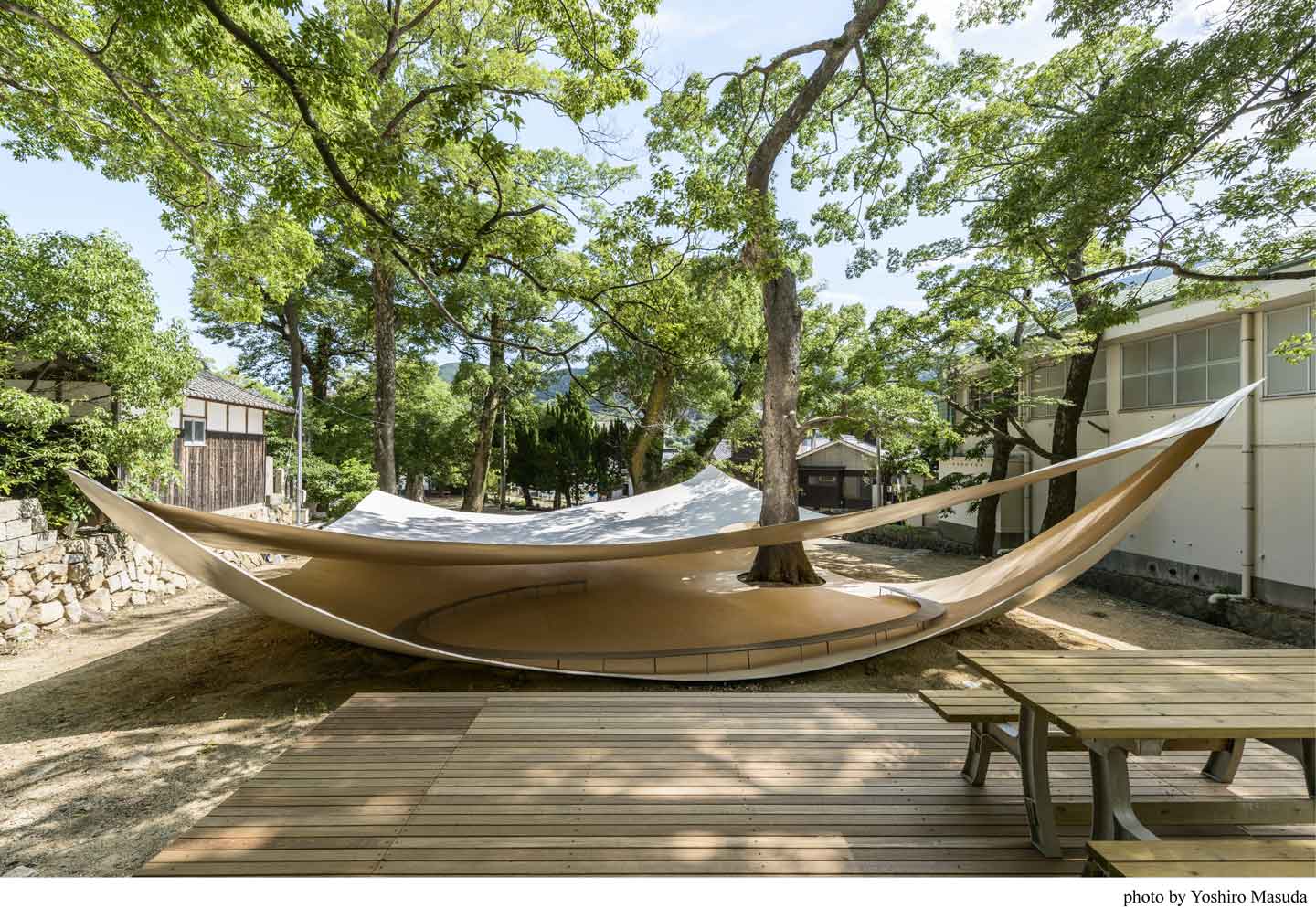 This unique pavilion is on the precincts of Fukita Hachiman Shrine, adjacent to the Fukuda Gymnasium. The space between the two large steel sheets serves both for seating and as a children's playground leading to the shrine precincts.

Like the renovated elementary school venue, the design is by Nishizawa Ryue. The two horizontally overlaid curved steel sheets are welded together at their edges in such a way that they hold each other in place, the top (roof) plate preventing the bottom (floor) plate from unfurling, while the bottom plate supports the top plate, which sags down in the middle.

Since the 2013 Setouchi Triennale, the Fukutake House project was involved in efforts with the Asia Art Platform, a project to connect various Asian regions through a single community within Shodoshima. In order to create a platform for cultural exchange for various people through Asia, it has held several events and presentation regarding Asian history and unique aspects of Asian culture, with the partnership of art-related organizations based in different regions and financial support both from the Fukutake Foundation and from individual donations. These efforts included inviting artists and chef as artists-in-residence to hold exhibitions and cuisine workshops in Shodoshima with the collaboration of the Fukuda local community executive committee.

In 2019, as the next step in building this platform, Fukutake House held a new performance event in collaboration with all the partner organization who have collaborated before. In addition, by 2020, we will seek to create a sustainable platform and create a system in which people with different histories and backgrounds can coordinate planning and share roles across organizations, thereby creating a synergistic effect of exchange.

Holding the event in Fukuda, a small village surrounded by mountains in the eastmost part of Shodoshima may help people consider a new essential lifestyle closer to nature.

The Fukutake House Fūdo* Laboratory expands on the activities of the Fukuda Asian Diner which launched in 2013 to connect guests, locals, and various parts of Asia through food. It has been carrying out various programs to revitalize regions, such as hosting food workshops for art festivals. The facility also goes beyond food by focusing on the unique local culture and its lifestyle through means like festivals and dance. By encountering, preserving and experiencing these distinctive aspects of the local culture, each participant can discover something that can enrich their lives. Linking the past and the future lets us seek out the complexities, brilliance, and joy of “living in the moment.”

(1)Accessibility
Due to characteristics of facility, some places are not accessible for visitors with disabilities and special needs.
We ask for your understanding.
We will support you as much as possible when you visit us, so please contact and discuss directly with our facilities.